The goal is to provide some insights how German tech-based startups use advisory boards in reality and to generate practical suggestions for both founders and venture capital investors.

Depending on the legal environment, startups may have different intentions to build advisory boards. While the Angle-Saxon one-tier corporate governance systems is build on the board of directors, which usually includes shareholder representatives but also external experts, the two-tier system for example in Germany requires such a similar supervisory board only for companies with more than 500 employees and stock corporations.

So by law, in the vast majority of startups only the management board (internal C-levels) and a usually yearly shareholder meeting would exist. But in reality, some empirical studies say that between 21 percent (in a study on high-tech startups) and 60 percent (in a study on SMEs) of the German companies have voluntary advisory boards that are more or less not regulated by law (except the behave supervisory boards).

My own study design is not appropriate to finally estimate the share of startups that actually have advisory boards, but both my academic studies as well as my more than five-year-long practical experience in the startups business let me confirm this numbers and especially in venture-capital-backed companies the share might be even higher.

My study is based on 21 qualitative in-depth interviews as well as 101 survey answers. The data includes founders of startups with and without advisory boards as well as advisory board members. First of all, some data to understand who contributed to the sample: 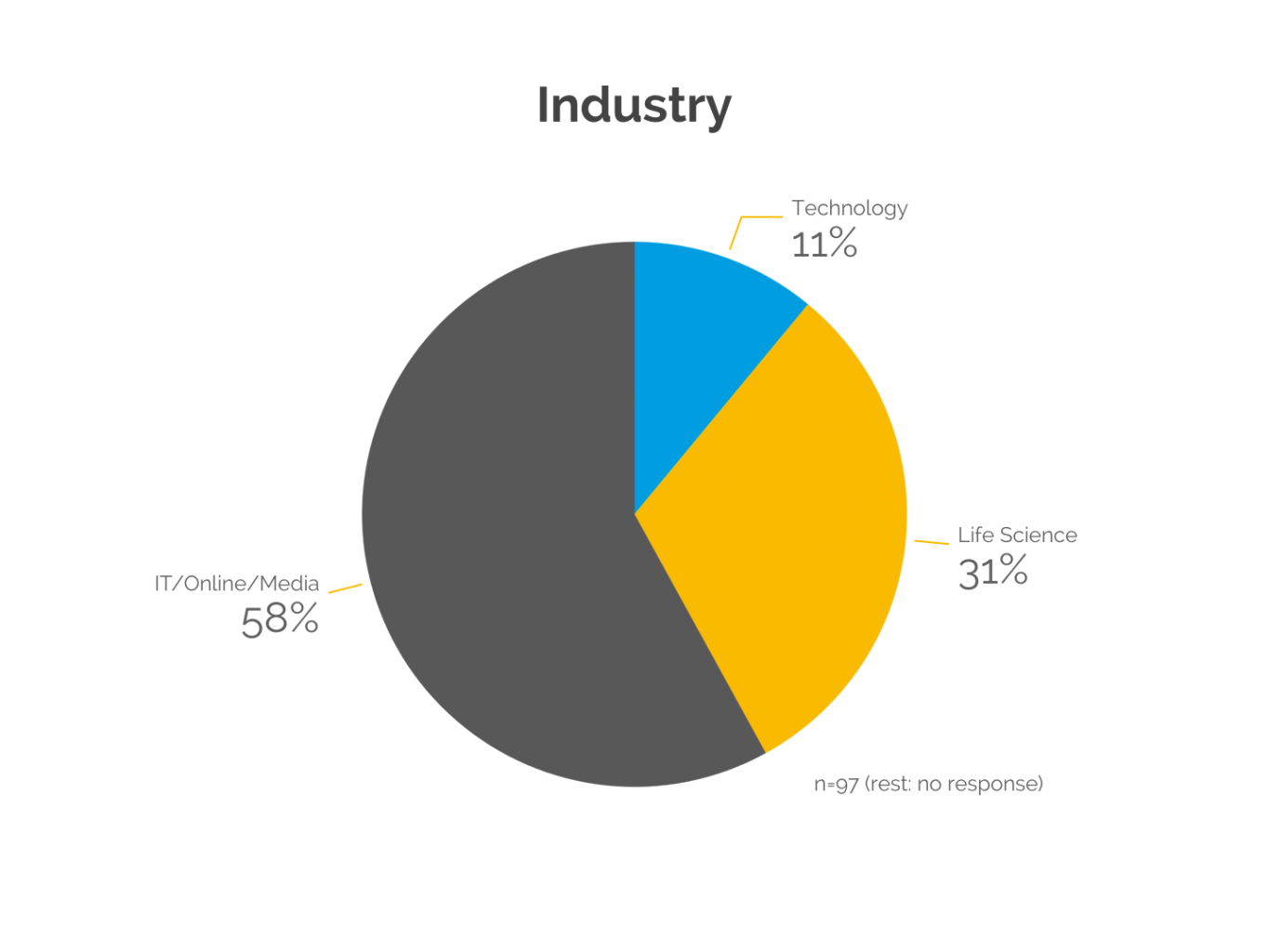 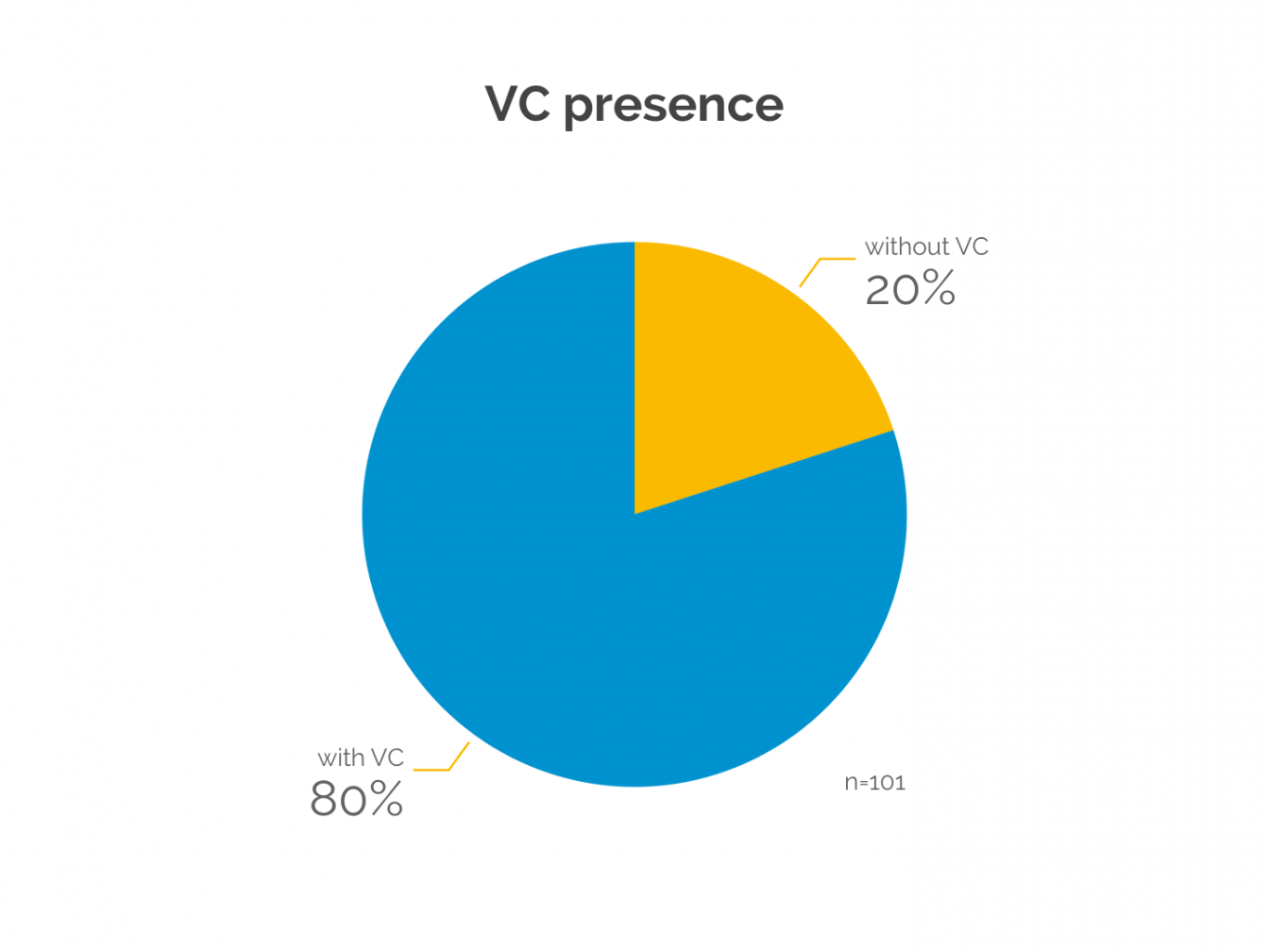 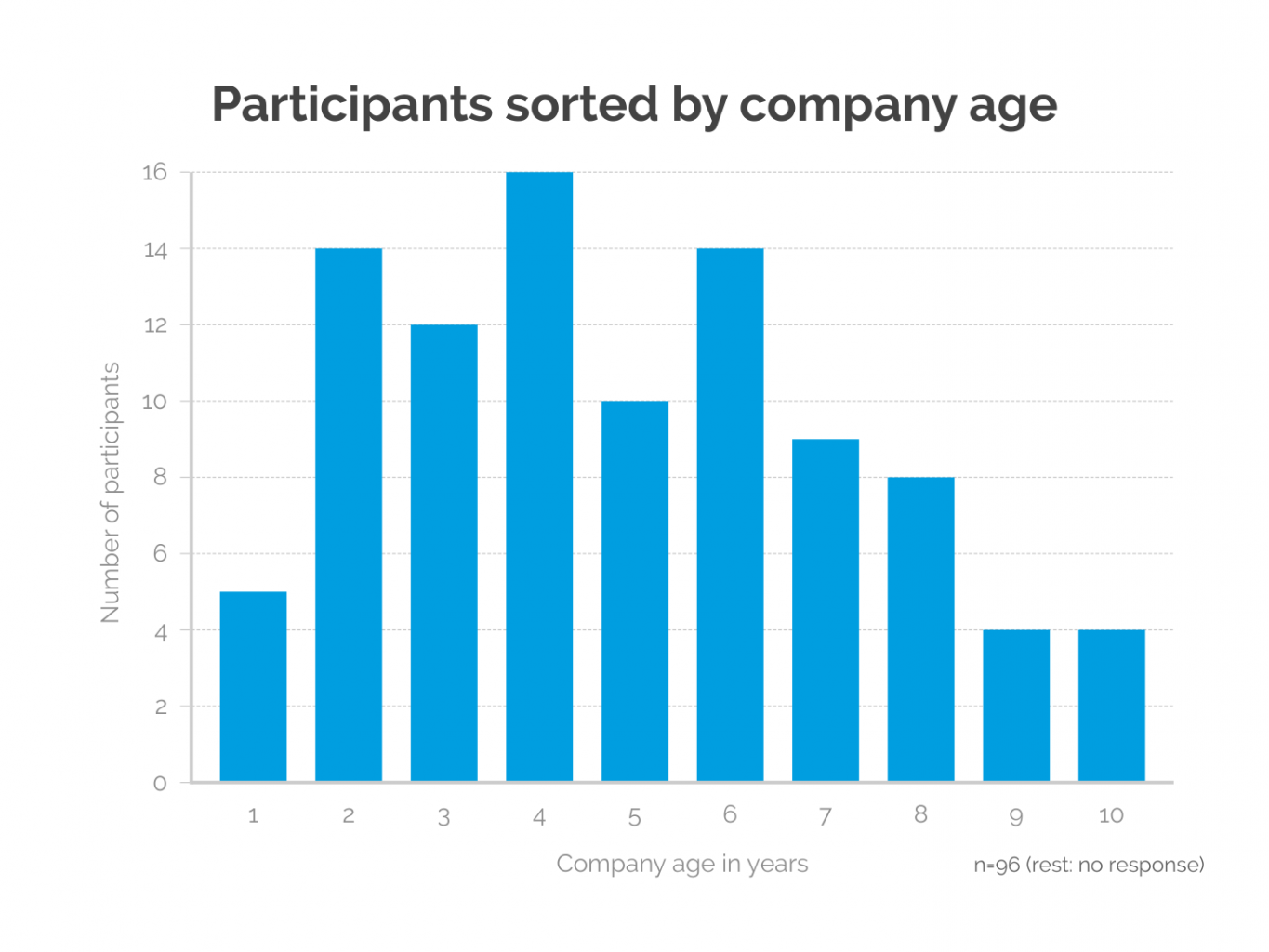 The goal to reach typical technology-based startups was achieved. One focus is in the area of “IT/online/media” startups that is overweighed and potentially biased. Roughly 80 percent of the represented companies are financed through venture capital, while most companies were aged between 2 to 8 years. As a result, the number of employees was in most cases less then 100 and the sales volume was below 4 million Euro but with high growth rates. 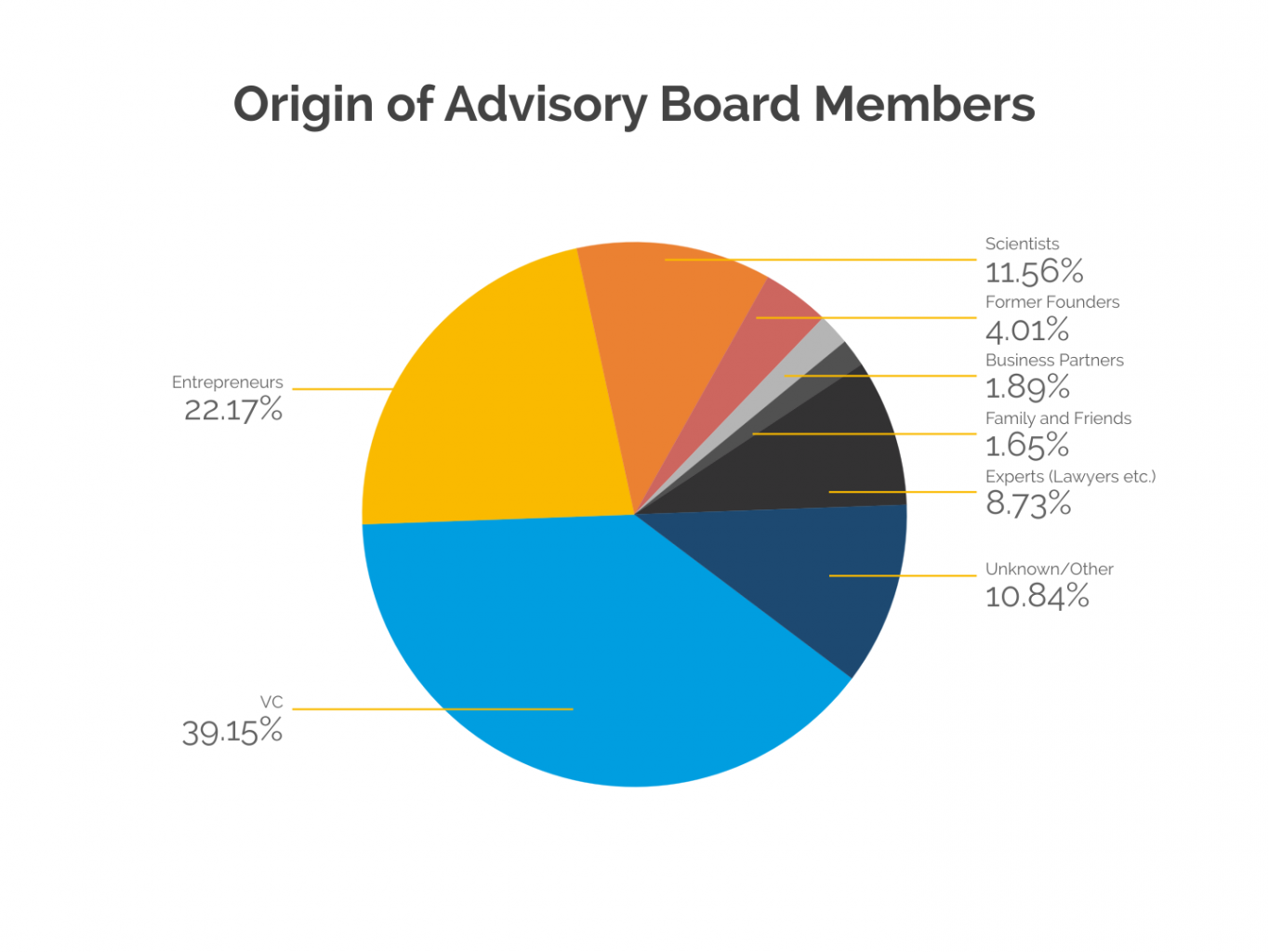 The study shows that only 11 percent of the startups established the advisory board completely voluntarily. More often investors required it or the management and the investors jointly decided to build it. That is why roughly 40 percent of advisory board members are representatives of the venture capitalists such as employed analysts or investment managers. The legal voluntariness seems to be replaced by an investor-forced necessity.

Often also experienced entrepreneurs or managers of established corporates are included as sparring partner for business issues as well as researchers for scientific questions (especially in life science and deep-tech startups). Anyway, nearly 9 percent of all advisory board members are law, tax or other consultants, while from a theoretical point of view research studies see these occupational groups are critical, especially if parallel mandates at those companies create contractual dependencies and also the value-add through additional perspectives is comparably small. In average, an advisory board in startups includes 4,2 members (median: 4). 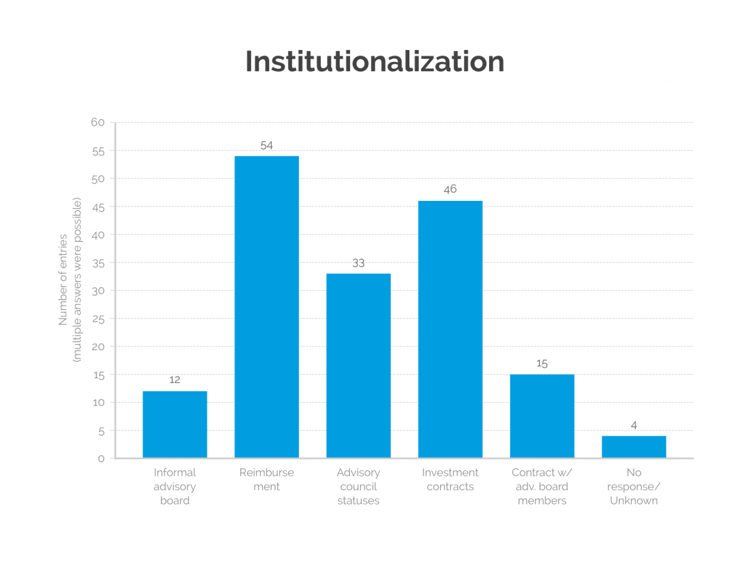 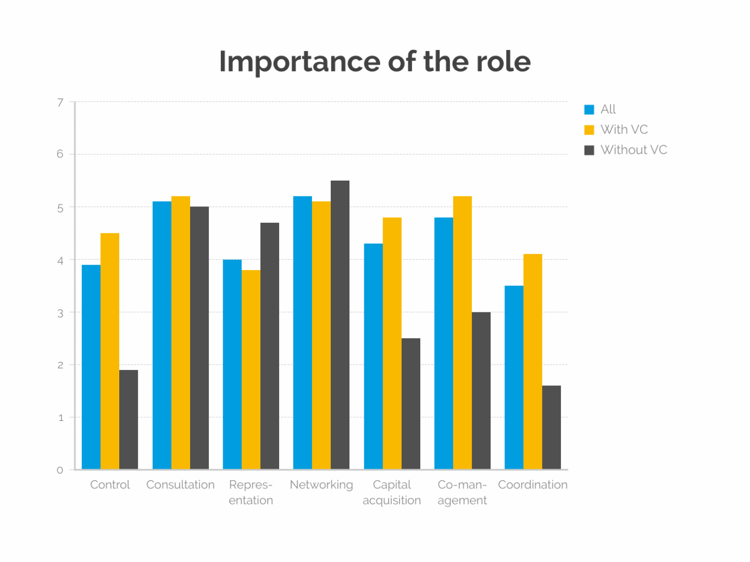 The different composition of advisory boards compared to American startups leads to different roles of an advisory board for German startups. Since US startups cover a control- and co-management-function through their boards of directors, advisory boards there are more or less exclusively active as advisors, for signaling reasons and as network expansion without legal liability. In Germany these roles are heavily influenced by the way of financing. While in the case of startups without venture-capital-backing the roles care very similar to the US model, the existence of venture capital in a company leads to a changed character of the advisory board. This will more intensively concentrate on control functions, further capital acquisition, active management and the coordination of shareholders. In that case, against all legal guidelines he can be called a “voluntary supervisory board.”

Fitting to that, according to the survey, founders see potential conflicts of interest between advisory board members and entrepreneurs as biggest risk, after the problem not to find appropriate advisory board members. Especially in venture-capital-backed startups these potential conflicts of interest as well as the limitation of the entrepreneurial freedom were classified as risks. But generally, those risks were ranked as low to medium in average. In particular the potential loss of critical information was valued as very small problem, since it is harmed on the one hand by contractual clauses and on the other by putting high importance on the criterion of “trust” during the selection of advisory board members.

Overall, with an average of 3,75 on a scale from 1 (“very unsatisfied”) to 5 (“very satisfied”) startups seem to be quite satisfied by the activities of their advisory boards. However, the results of a correlation analysis and a multivariate regression analysis indicate that especially strong advisory and networking roles and the support on capital acquisition have a positive impact on the satisfaction of entrepreneurs, while control leads to dissatisfaction. Unfortunately, the data set was not appropriate to identify a valid impact of advisory board roles on the commercial performance of startups.

So which implications for practice evolve from the quantitative survey and the corresponding in-depth interviews? Here are some ideas for both founders and investors in Germany:

The full research study has been published as part of my PhD studies at HHL Leipzig Graduate School of Management by Springer Gabler. If you are interested in details, theoretical backgrounds and methods (including results of multivariate research methods), please find it here:

What do you think is the number one reason that startups succeed?

First impressions for a startup: 6 ways to perfectly present your logo